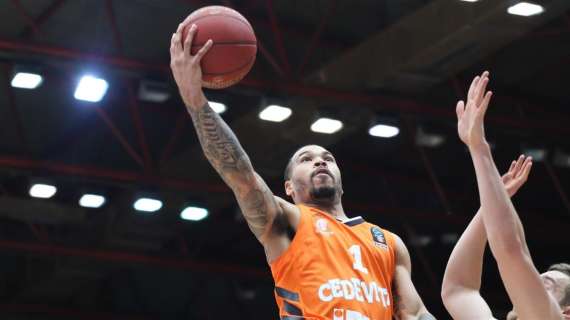 One game provided a head-to-head battle for the MVP of Round 8 honor, and when the dust settled, Cedevita Zagreb had beaten Arka Gdynia 94-87, giving combo guard Justin Cobbs the edge. Cobbs exploded for 28 points, dished 7 assists and pulled 4 rebounds while also setting a club record with 11 two-point shots made as Cedevita qualified for the Top 16. His efforts produced a performance index rating of 36, which was two behind the player he was battling, Josh Bostic of Arka. Cobbs was the MVP by virtue of having the highest PIR on any winning team in Round 8. Bostic did his best to change that, however, matching Cobbs with 28 points while adding 8 assists, 6 rebounds and 1 block for a PIR of 38. His points and PIR broke club records, while his assists tied another. Coming in third in Round 8 was center Miro Bilan, whose 33 PIR lifted LDLC ASVEL into the Top 16. Along with his PIR, Bilan's 23 points and 10 two-point shots made were personal highs in his 53rd career EuroCup game. Two players who sparked their teams to overtime wins had PIRs of 31 each to close out the top performances of Round 8. Jamel McLean amassed 21 points, 7 rebounds, 3 assists and 2 blocks as Lokomotiv Kuban Krasnodar outlasted Tofas Bursa on the road. Aaron Craft combined 17 points with 13 assists and 2 steals in Dolomiti Energia Trento's spectacular rally to beat host Zenit St Petersburg.