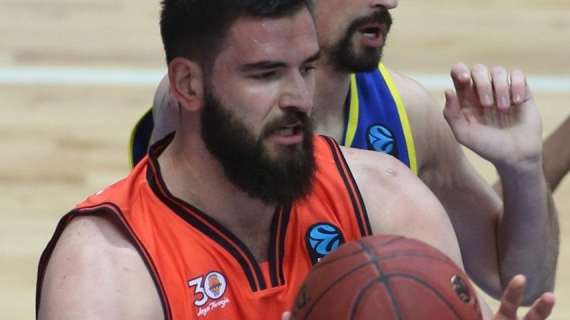 Having already set several 7DAYS EuroCup records this season, center Bojan Dubljevic added another honor to his name by becoming the MVP for Top 16 Round 4 while leading Valencia Basket into the quarterfinals on Wednesday. Dubljevic headlined Valencia's 81-82 road win over Crvena Zvezda mts Belgrade with an all-round performance of 24 points, 8 rebounds, 5 assists and 1 steal. He made 6 of 10 two-point shots and 4 of 6 triples on his way to a performance index rating of 29, his highest since 2014, earning Dubljevic his fourth MVP of the Round award. Paul Lacombe of AS Monaco had a career-best PIR of 28, the second highest of Round 4, in his team's 68-71 home loss against Partizan NIS Belgrade. Lacombe netted a career-high 23 points to go with 7 rebounds and 4 assists. Next on the list of best performances in this round were David Walker of MoraBanc Andorra and Mathias Lessort of Unicaja Malaga, who each had a PIR of 26. Walker compiled 20 points, 7 rebounds, 2 assists and 1 block as MoraBanc beat Zenit St. Petersburg 86-74 to reach the quarterfinals. Lessort had 14 points, 8 rebounds, 3 assists and 2 blocks in Unicaja's 77-78 road win over Limoges CSP.