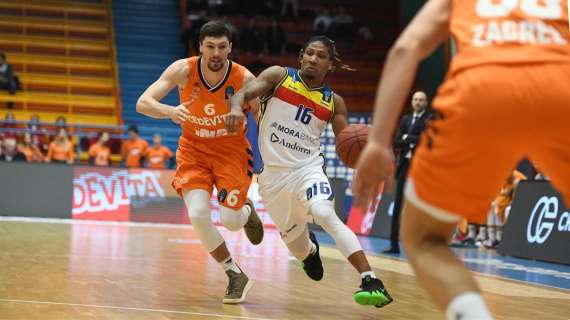 Andrew Albicy made history in many ways on Wednesday night as he led MoraBanc Andorra to victory in its maiden 7DAYS EuroCup Top 16 game and became MVP for Round 1 of the phase. Albicy set club records for Andorra in the EuroCup with 6 three-pointers made and a performance index rating of 37 in pacing an 81-87 win at Cedevita Zagreb. He scored a career-best 22 points while also tallying 8 assists and 4 steals. The French playmaker not only put up big numbers, but came through when he was needed most, after Cedevita rallied from a 17-point deficit to tie the game with a minute to go. That's when Albicy stepped up with a tough layup-plus-free throw for the go-ahead score, after which Cedevita did not recover. Albicy became the first MoraBanc player to win the EuroCup MVP of the Round honor. The next-highest PIRs for Round 1 came from Dominique Sutton of Rytas Vilnius and Jalen Reynolds of Zenit St Petersburg, with 28 apiece. Sutton produced 21 points, 5 rebounds and 5 steals in an 80-74 win over Partizan NIS Belgrade. Reynolds collected 17 points, 17 rebounds and 2 blocks in a 68-67 loss at UNICS Kazan. LDLC ASVEL Villeurbanne center Alpha Kaba had a career-high index rating 26 in his team's 65-67 road win at Lokomotiv Kuban Krasnodar. Kaba scored 16 points, pulled down a career-best 13 rebounds, and tied a club record with 4 blocks. Rounding out the top performers for Top 16 Round 1 are Justin Cobbs of Cedevita and Elmedin Kikanovic of AS Monaco, each with a PIR of 25. Kikanovic has 16 points and 8 rebounds in a road loss at his former team ALBA Berlin, while Cobbs had 19 points and 7 assists despite his team's defeat at the hands of Andorra.