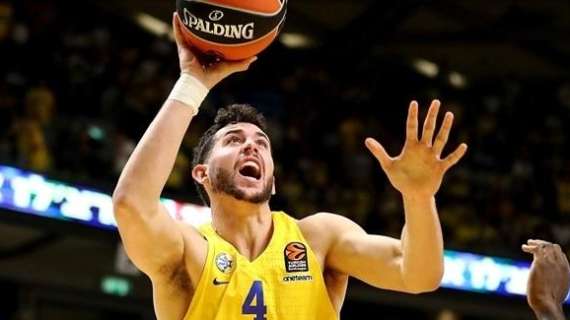 Maccabi FOX Tel Aviv recorded its fourth consecutive Turkish Airlines EuroLeague victory on Thursday thanks in part to the outsized efforts of Angelo Caloiaro, whose performance earned him the MVP award for Round 20. Caloiaro led Maccabi to an 84-75 home win against Panathinaikos OPAP Athens with 20 points on 4-for-5 two-point, 2-for-4 three-point and 6-for-6 free throw shooting. He also pulled a career-high 11 rebounds – including 6 on offense – to record the first double-double of this, his rookie EuroLeague season. Caloiaro added 2 assists and 5 fouls drawn for a PIR of 33, the highest in Round 20. Toney Douglas of Darussafaka Tekfen Istanbul came next with a PIR of 30 in his team's 80-75 home win against KIROLBET Baskonia Vitoria-Gasteiz. Douglas led Darussafaka with 21 points, 5 rebounds, 6 assists and 5 steals. Anthony Randolph of Real Madrid and Mike James of AX Armani Exchange Olimpia Milan each had a PIR of 28. Randolph had 24 points on 5-of-6 three-point shots and 6 rebounds in a 92-84 victory over visiting Anadolu Efes Istanbul. James led Milan to an 80-70 home win against Zalgiris Kaunas with 20 points, 9 assists, 4 rebounds and 4 steals. Goga Bitadze of Buducnost VOLI Podgorica and Nando De Colo of CSKA Moscow each had a PIR of 27 to complete the top individual performances in Round 20 as their teams won against Spanish opponents Herbalife Gran Canaria and FC Barcelona Lassa, respectively.