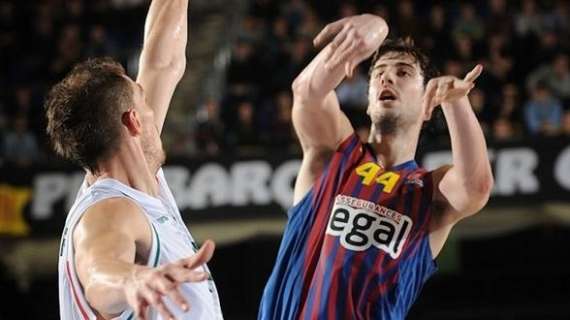 In an emotional El Clásico on Friday night, FC Barcelona Lassa held off arch-rival Real Madrid 77-70 behind a stellar performance from team captain Ante Tomic, who earned the MVP of the Round honor for Round 24. Tomic finished the game with 22 points on 9-for-16 two-point and 4-for-6 free-throw shooting, while pulling down 13 rebounds and dishing 3 assists. It was Tomic's first double-double of the season, and he accumulated a performance index rating of 28, the highest on winning teams in Round 24. This marks the seventh MVP honor of Tomic's career and his first since almost four years ago. The highest PIR of this round, but in a losing effort, belonged to Alexey Shved of Khimki Moscow Region, who returned in style after a 14-game absence for injury. In a dramatic 88-90 home defeat at the hands of AX Armani Exchange Olimpia Milan, Shved scored 23 points and dished 11 assists on the way to an index rating of 29.